Enter your email address and sign up to receive email alerts of our newest blog posts.

Thank you for visiting our blog and trying to guess the location of the picture below! 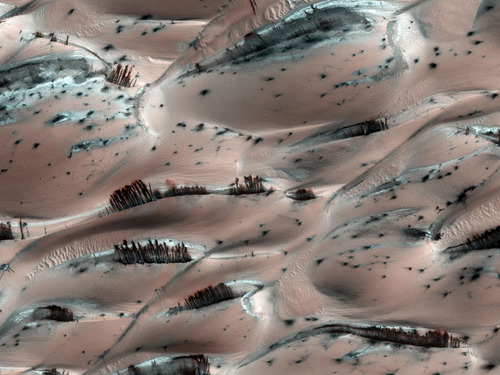 Well, the photo is not of sand dunes or any desert you may know of on Earth. And those aren’t trees peeking through sand or snow. The image was taken in April of 2008, near the North Pole of Mars! Photographed by the Mars Reconnaissance Orbiter, the photo reveals groups of dark brown streaks of sand on melting pinkish sand dunes that are covered with light frost. At that time, dark sand on the interior of Martian sand dunes was becoming more and more visible, as the spring sun melted the lighter carbon dioxide ice.

When occurring near the top of a dune, the dark sand can cascade down the dune leaving dark surface streaks — streaks that might appear to be trees standing in front of the lighter regions — but notice that they cast no shadows! If you look very closely, some parts of the image also show billowing plumes, indicating that some sand slides were actually occurring as the image was being taken!